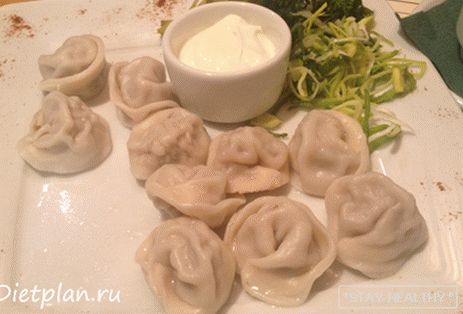 Alas, the practice of making dumplings from low-grade raw materials
caught on in our country long before the appearance of the free market.
By the 1970s, meat processing plants in the USSR were faced with
the problem of rational use of waste.
Tendons, substandard meat trim and liver simply
thrown into landfills. The solution was found fairly quickly –
similar raw materials began to be used as a filling for ravioli.
By its effectiveness, it was a great move: the population got
a cheap product, and the authorities have eliminated the need to dispose
most of the waste. A lot of time has passed since then, but to this day
it is not clear: why the USSR ceased to exist, and such
dumplings – no?

It would seem that competition should have a positive effect on
the quality of Russian dumplings. But today, many manufacturers
left far behind even their Soviet predecessors. AT
погоне за максимальной прибылью они перешли на тотальную
savings: often instead of quality meat, they use a mixture of fat,
bone meal and soy. Do not stop many market participants and
counterfeit production. As a rule, it mimics
the packaging of famous brands – the same color scheme, slogan, style
lettering. According to some reports, such fakes make up
a quarter of the total volume of dumplings produced in Russia. The
more unpleasant to think about their stuffing – at best, it is overdue
or substandard meat.

But what about the standards governing the quality of his beloved Russians
product? They are, and even relatively recently published. GOST R�
51187 from 1998 regulates the manufacture of ravioli and other
frozen convenience foods. It should be noted that appeal to him
raises more questions than answers. In addition to high quality
raw materials, the standard completely allows the use of “frozen blocks
from trimmed meat and offal OST 49-66-74 “and” muscle tissue
with a fat share of not more than 85%. ” In addition, manufacturers officially
allowed to add “soy protein TU 10-04-02-31-88”. What’s cheaper
for the manufacturer – to buy natural quality
pork, or fat and offal? So complain not to
what. It turns out that the manufacturers of ravioli are absolutely legal.
fill them with low-quality raw materials. This also applies to
genetically modified soybeans – after all, in the market it is the cheapest. On
packaging its presence is hidden by the expression “vegetable protein” or
�”Soy protein”. But is it dangerous to use it for our
health?

What raw materials to use – cheap or expensive? For most
The manufacturers answer is obvious. Exception is those who
really cares about business development and maintaining its
business reputation. But how to recognize their quality products in
refrigerators of Russian supermarkets? 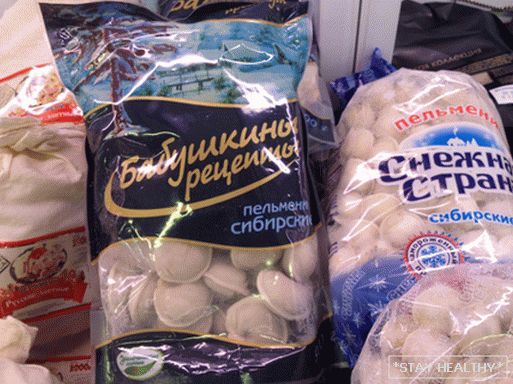 1. Filter out a suspiciously low price. Qualitative
dumplings can not cost less than 100-150 rubles per 0.5 kg. Works
The old truth – cheap good does not happen. 2. We carefully study
the composition of the semi-finished product. Ingredients like “vegetable” or
�”Soy protein”, “flavoring”, “semolina” should make you
refuse to purchase. 3. Pay attention – is the share indicated
each of the ingredients in the dumplings? If not, better
put the packaging back. Most likely, the meat in this product is not
more than 10 percent. 4. Look at the shelf life – dumplings without
Preservatives are stored in the freezer no more than a month. 5. Pay
attention through the transparent polyethylene on the look of the dumplings themselves. If a
dough is grayish or cracked – the manufacturer uses flour
Bad quality. If a тесто желтоватое – значит, использован
dye.

Dumplings product is not dietary at all. Pork in the dough is unlikely
You will be advised by a nutritionist. AT среднем, в 100 граммах пельменей
contains about 270 calories. This is without regard to sour cream or butter,
which are usually added after cooking.  This is enough
lot.