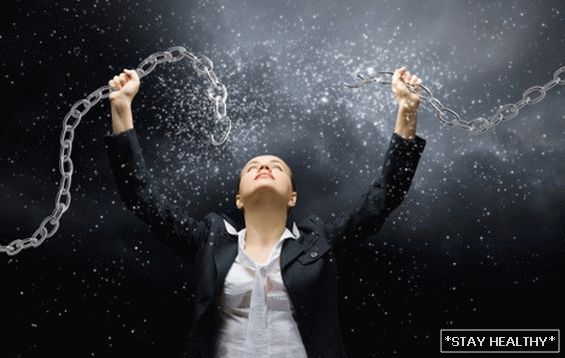 Another thing, if after the contact a person continues
remember the interlocutor, his image, as well as constantly overcome
thoughts of him then this is evidence of education
energy binding.

How and why bindings are formed

Binding at the energy level is formed when a person
becomes addicted. Such a relationship may arise not only
from another person, but also from objects, goods, for example, money,
events, things of the past.

An energetically attached person loses his
independence, will, your way. Peace of mind more and more
more continues to be lost and the person becomes irritable and
uncollected.

At a higher level, every soul is independent and free, but
when strong binding occurs, it causes some dissonance and
loss of energy, which can lead to various diseases. how
rule this process proceeds unconsciously.

The energy binding on the thin plane is a tube with flowing away
energy, the color of which depends on the chakra and the person who is testing
of emotions.

What is the difference between the energy channel and the binding

When channels are created, it is completely normal and does not carry
any damage to the energy and mental state of people.

Binding is an addiction, as already mentioned,
however, the binding is not always negative.

Some bindings are necessary and useful, such as, for example, in
normal degree between parents and children.

What are the bindings

There are artificially made bindings, and the most vivid example is
love spell. When the magician conducts such a rite, it is built, from
future bewitched to the customer of such an action, binding,
hooked or knotted to a specific
chakra. All this can be seen on the thin plane.

A bound person will be very dependent, but the soul
will try to break free from her exposure.

After such a rite of speech can not be about love, bewitched
simply suffers, loses energy, but leaving the bewitched is not
can.

A person can independently and unconsciously do
energy binding by a large emission of negative or
positive energy. So, if a woman is obsessed with owning a man
and on this occasion constantly worried, angry, jealous and
experiencing other emotions, then she creates dependence herself
from this man.

A man on an unconscious level will feel a flow of energy and
astral attack from a woman. In this case, you need to let go
man, it will help recuperate.

It happened that as soon as the woman let go
lover, not the mind, namely the soul, the man experienced that
energy is no longer flowing to him and was looking for contact with
her.

But relationships that were originally created on dependencies are not
bring happiness and peace.

But the strongest bindings occur between children and
parents, where there is a place of repression of the individual. It may be
total control of parents, their excessive care. In such conditions
It is very difficult for the soul to fulfill its true purpose. Such
families, children only after growing up and starting an independent life
gain true emotional freedom.

Some bindings are so strong, especially
based on negative emotions that can provoke
attraction in the next incarnation.

All karmic connections are based precisely not
bindings that were created in past lives. To clear
karma and get rid of the person, you need to forgive him, not to experience
no emotion to him, which will lead to destruction
bindings.