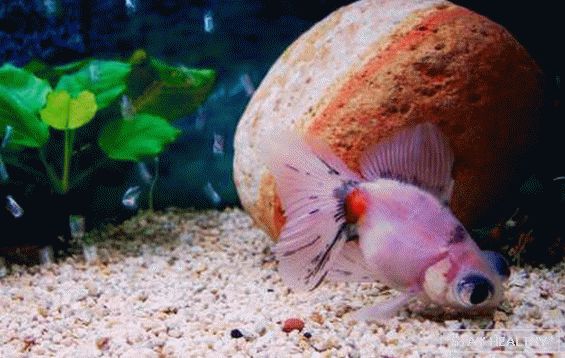 Probably these lovely creations from the so-called
a large family of “goldfish”, lived in aquariums in the XVII
century in the homes of the nobility of many Asian countries, but in Europe and Russia about them
learned only in the seventies of the XIX century.

Since then, dozens of models of telescopes have been derived, which,
by the way, on the whole, unpretentious and without hassle even contain
novice aquarists.

The name telescopes owe a huge
bulging eyes, the exact shape of which may vary, and no less
varied colors of fish:

And it is noteworthy that there are not only ordinary ones, but also
scaleless telescopes. 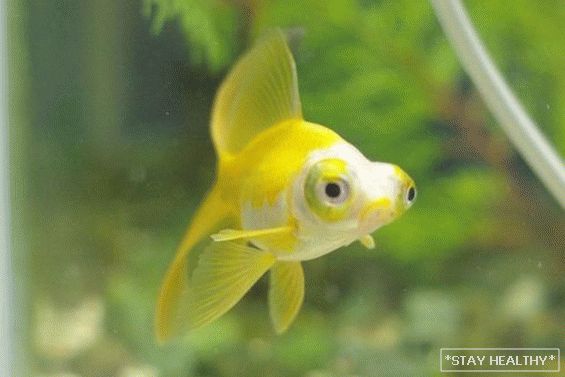 The body of all fish is rounded with gorgeous, large fins,
resembling veil patches, brocade. In favorable conditions, fish
grow up to 10-15 cm in length (less often up to 20 cm) and can live up to 10
years old. Of the other aquarium species, the closest is (in shape and size
eye) to telescopes varietet goldfish called
�”astrologer”.

Telescopes are not lovers of snooping around the aquarium,
but rather active, only they are characterized by sluggishness and
clumsiness (structural features), so you shouldn’t be surprised
if the pet suddenly lost balance and flipped over
once.

The main requirements for the aquarium

And in connection with this style of movement, the general style of behavior and
fragile appearance, in an aquarium telescope should not
meet:

And it’s better to abandon the “reservoir” of a round shape – because of it
Fish, in principle, their eyesight deteriorates, and in telescopes it is not
the best.

It is recommended to place the aquarium in the light – with its
the shortage of fish becomes lethargic, their color turns pale, they have
reduced immunity.

Even for a good life, telescopes need space, which means that
Ideally, each individual should be about 50 liters of water.

The content of this type does not require constant heating of water –
at room temperature the telescope is quite comfortable, but high
the oxygen content is mandatory (which means you need to buy
appropriate devices).

Optimum water hardness (GH) should not exceed 18, level
acidity (pH) should be in the range of 5.5-8. A plus,
telescopes do not like the high content of bleach in tap
water, so that in the presence of such a problem of its composition, should
clean the liquid with a special detoxicant (located in
pet stores).

The bottom is cleaned every 5-7 days, spring-cleaning with change
half of the volume of water is carried out monthly (or they change every 10 days
water by 20%).

Not only plants can damage
telescopes, but vice versa – even without being hungry, they are sometimes not
off to “try on the tooth” aquarium greens, so that, in
avoid deterioration of landings, sustainable recommended
species, for example:

So that pets do not violate the root system, the soil above it
cover with large, heavy pebbles. 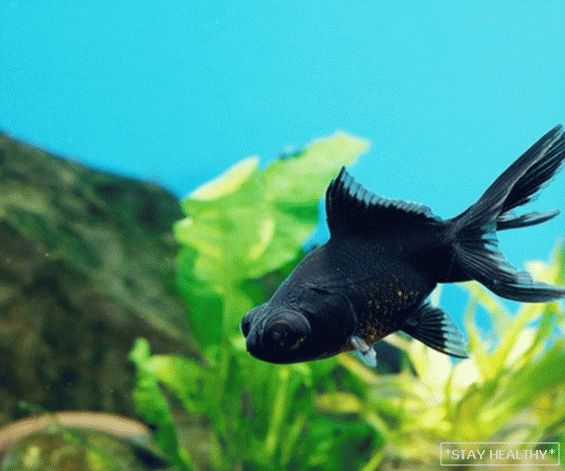 But in order not to deprive telescopes of completely vegetable food, you can
start on the surface of the water a little duckweed.

Indeed, being a distant relative of carps, the telescope is not
off to dig in the ground in search of yummy. In connection with which
granulated feed with their
inability to dive deep into the ground and long term decay
(decomposition).

But in principle, these fish will be happy for everything – to feed the living and
frozen, various artificial options. And very
It is advisable to periodically add feedings to the telescope’s diet.
the richness of color and maintaining the health of fins, shine
scales.

Very good (many years of experience, awards and positive feedback)
products can be found in the assortment of feed company “Tetra”.
Artemia can be an additional natural treat,
tubers, bloodworm, daphnia.

The telescope feeds sedately, slowly, until it finishes –
It can take half an hour, and he is also a terrible glutton (which can be
cause disease and treatment including starvation
диету).

Therefore, it is more dangerous to overfeed him than to ask enough food.
Which, by the way, is done twice a day – in the morning and in the evening. After waiting 2-5
minutes, the remnants of food are trying to remove (perhaps a pet is a pity, but
better to hurry him).

And it is also important to note the danger to these fish – unacceptable.
the presence in the aquarium of small pebbles that telescopes can
swallow

Diseases and something else

The specifics of anatomy, naturally creates an eye risk
diseases of telescopes, but they are also susceptible:

For those who want to have a telescope, it will be useful to know more about it.
such facts:

Who is the telescope good neighbor with?

Voilehvosty, shubunkin, orande and all sorts of goldfish, the
there are all relatives – the best company for gentle, melancholic
telescopes. Guppies, cichlids, gourami, angelfish and neon fish too
will not offend, push aside from the feed, tear off fins.

But to contain telescopes with Sumatran barbs and
Denison, and also with tetragonopteruses categorical prohibited
in order to avoid aggressive attacks at first.