Pilates is considered a physical wonder by both housewives and stars
Hollywood A set of exercises in which the muscles stretch,
joints are strengthened, the mind pierces clarity, and the soul fills
appeasement is really worthy of attention. 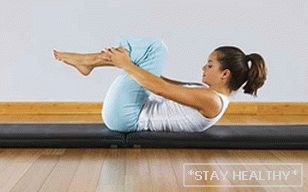 The exercise system, the whole “philosophy” of Pilates is built on
proper breathing, through which we gain in addition to good
Figures taste of life and glowing smile.

How do you breathe in everyday life? Most likely, when you breathe
the chest expands, the chest rises. So with
doing pilates exercises you have to learn to breathe
�”Belly”. This, as acknowledged by coaches and girls, is the most difficult.
Because to send air to the lower part of the lungs and at the same time
trying to relax not only the body but also the mind is not a task
simple. Not by chance, probably, originally Joseph Pilates, whose
named and called a set of exercises, invented for his cycle
The name “Contrology” is the control of muscles through thought.

Pilates trainers are usually girls who teach and
yoga, assure that after a couple of months of thoughtful exercises, breathing
�”Belly” becomes familiar, stiffened from office work
muscles start to work, energy corked in a bent body
starts to circulate. As a result, self-confidence grows,
sexuality, plastic movements, and to establish what is
the cause, and what – the result – is impossible, but in fact and not
need to.

In addition to this inspiring effect, Pilates improves posture,
helps solve problems with digestion, eliminates
chronic pain in the back and neck and improves overall health.

You can do Pilates with a trainer, and on your own, but on
First of all, it’s better to work with a professional, after all.
incorrect exercise, as in any other sport,
may cause harm.

Pilates doing just on the mat, or using
dumbbells and balls, or on special pilates simulators. Fans of this
systems claim that all shells are from the evil one, because
the human body has enough leverage and weight,
to train yourself. But who what.

Pilates is often compared to yoga, and there is a certain
meaning, because both in the one and the other kind of workout loads are calculated on
gradual complication of exercises, all groups of muscles are trained, no
age and weight restrictions, and most importantly, both approaches help
reconcile body and mind. But unlike yoga, which, before
all, spiritual practice aimed at self-knowledge, Pilates –
This is a clear set of exercises designed for recovery.
body and muscle strengthening.

The pilates exercises themselves are pretty simple, many of them are familiar.
us on physical education classes at school: lift legs perpendicular
up, lying on his back, “scissors”, various “bridges” and “birch trees”.
But it is on Pilates that they will teach you to do each movement correctly and
thoughtfully, breathing “rationally”, and get maximum benefits for the body and
souls in an hour of study.

Speaking of classes. As a rule, before performing the exercises
there is a warm-up, during which the muscles are heated and
tuned to the desired mode. A good trainer of all goes well with
each student and correct, if something goes wrong. Pleasure is not more expensive
others: the subscription price for a month of pilates classes at such an expensive
Moscow as a city ranges from 2500 to 4000 thousand rubles.

By and large, after several months of training in the hall you can
go to the “home” mode. The main thing is to understand:
Pilates, like any sport, will not bring success and benefit to those
who will approach him without sufficient attention. Only regular
classes will give tangible results.

Joseph Pilates, before inventing his method, suffered from asthma,
rickets and rheumatic fever. And today, his fans
a set of exercises among other millions of people such person
like Madonna, Jennifer Aniston, John Travolta, Uma Thurman, Julia
Roberts and Ksenia Sobchak.