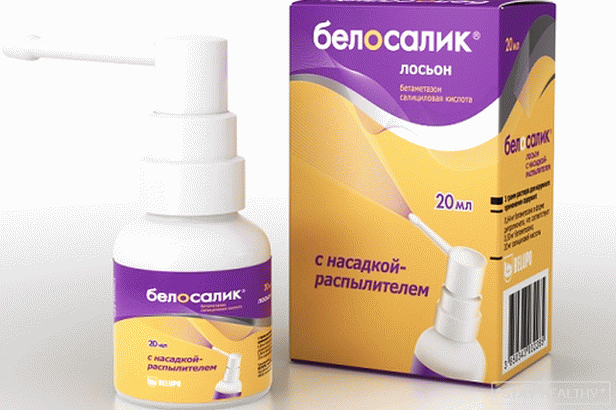 When you do not feel comfortable because of diseases of the hairy head, you should pay attention to the pharmaceutical agent New generation Belosalik. It is a combination drug that effectively treats all dermatosis, accompanied by peeling of the skin, hyperkeratosis and inflammation. Lotion Belosalik helped to return self-confidence already thousands of people who turned to him for using

The composition of the drug

Belosalik lotion has anti-edema, anti-inflammatory and antipruritic action. Also the tool has the following properties:

The main active ingredient of the lotion is betamethasone dipropionate, which is combined with salicylic acid. Auxiliary components of the drug are sodium hydroxide, hypromellose, isopropyl alcohol, disodium edetate and purified water. Betamethasone inhibits inflammation and allergies, reduces blood permeability vessels, due to which decreases swelling. Salicylic acid has keratolytic effect, cleans the affected areas from scales and facilitates penetration into the skin of betamenazole.

Belosalik is prescribed for chronic and acute dermatoses, which accompanied by desquamation and hyperkeratosis. To diseases that treated with lotion, include:

Instructions for use Belosalik lotion

According to the instructions for use Belosalik lotion is used outwardly, rubbing light movements. Standard treatment drug – 3 weeks with a rubbing frequency of 1 to 3 once a day. If the doctor prescribed a longer treatment, then Belosalik lotion may be applied every other day.

When treating chronic pathologies, do not discontinue therapy after the disappearance of symptoms to prevent recurrences. If the bottle is equipped with a spray, it is sprayed on the damaged skin area by pressing the spray. If you purchased a bottle with with a dropper, the application of the lotion is distributed using cotton swab.

Contraindications and side effects < / h2>

Belosalik lotion can cause burning, irritation, dryness and local loss of pigment. Bandages with this drug can lead to atrophy of the epidermis, the accession of a secondary infection, the formation of stretch marks. Prolonged use of the drug increases the likelihood of such reactions as Itsenko-Cushing’s syndrome, asthenic manifestations, confusion, hearing impairment, dyspepsia, and pale skin.

The use of Belosalik is contraindicated for pustular diseases, syphilis and skin tuberculosis. It is strictly forbidden to apply lotion on open wounds, with fungal and viral infections (chickenpox, herpes). Avoid getting lotion on mucous membranes. In case of suspicious symptoms or overdose, contact your doctor immediately to adjust the therapeutic action.

Can I use during pregnancy and children? < / h2>

Belosalik used during pregnancy in the case when the health benefits of women outweigh the risks of gestation. In this case, the drug is used for a short time on limited areas of the body. During lactation, the lotion is used in small doses and only according to strict medical indications, while not applying it to the area of the mammary gland.

For children, Belosalik is prescribed with strict precautions, because there is a danger of suction of a large number of active ingredients due to insufficient maturity of the epidermis. In order not to increase the risk of undesirable reactions, do not use the medicine for diapers or dressings in children.

With psoriasis, the drug has a fairly quick positive effect. After applying the lotion to the plaque, salicylic acid softens the upper layer of the epidermis, creating unfavorable conditions for bacterial and fungal microflora.

Penetration under the skin of betamethasone reduces itching. However, it is not recommended to combine Belosalik in the treatment of psoriasis with other local means, especially those created on the basis of corticosteroids, in order to avoid irritation. < P>

How to replace Belosalik lotion? Cheap analogues of the drug, there are many. Consider some of them: