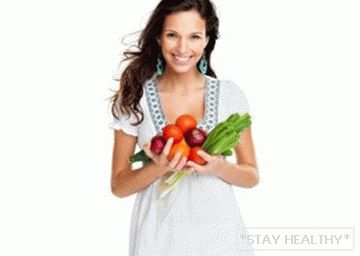 Glycemic
index (or GI) is a quantitative indicator by which
You can clearly assess the degree of influence of a particular product on
the dynamics of increasing blood sugar levels after consuming it in
food.

For the first time about such a phrase people heard back in 1981
year from the famous at the time Canadian professor and doctor
Sciences David Jenkinson, who in the course of his research
revealed that foods have a completely different effect on
human organism.

An example is ice cream, which, despite
its sweeter flavor unlike ordinary white bread,
when ingested, it has a much smaller effect on volume.
human blood glucose than bread.

After D. Jenkinson scientists, doctors and researchers of all
world began to study this issue in more detail, as a result, they are all
over 15 years came to a consensus and experimentally
developed a special glycemic table of products.

In fact, the data from the table correspond to the ratio of influence on
blood counts of a certain food product against the background of the same
reactions of the body to pure glucose, which, by the way, GI
equals exactly 100 (high).

Foods with a high glycemic index

The GI indicator of a particular product primarily depends on
the ratio of carbohydrates, fiber, the presence of fructose and lactose,
its protein and fat content, and, of course, the method and
quality heat treatment.

Foods with a high glycemic index significantly
absorbed faster by the body, causing a dramatic increase in
blood glucose that causes the pancreas to
stabilize the situation, proceed to the active development of the hormone
insulin. Such “swing”, according to experts, can
provoke weight gain, heart problems and
various neurological diseases.

Some products with high GI: 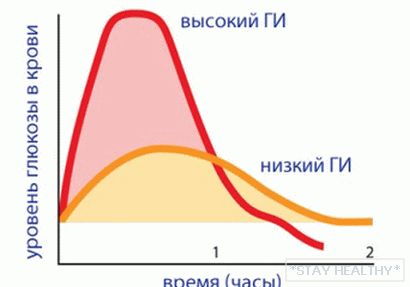 Products whose GI is 55 or less when ingested
cause a smoother rise in blood sugar and longer
digested in the gastrointestinal tract, as they are usually
contain complex carbohydrates that are slowly
split by enzymes.

Such products should be taken by people who seek
lose weight, besides, they are able to suppress the feeling
hunger for a longer period of time.

Some products with low GI:

Scientist and doctor of science David Ludwig working in the nursery
Boston Hospital, has conducted many studies, of which
concluded that people eating breakfast with high
glycemic level, eaten throughout the day at 80%
more calories than people who ate low
Gi.

This is due to the fact that a sharp surge of blood glucose raises
the level of norepinephrine, which can induce the desire of a person
anything else to feast on.

We have already found out that people who want to lose a couple of
kilogram, it is necessary to give preference to products with
low GI, but for athletes this technique is just
contraindicated. After all, in order to achieve
tasks, it is important to be attentive to many
factors, for example, the right choice of products, different
training approaches and more.

Before any physical activity, the athlete must eat.
with a high or even average GI, since its main
the task is to quickly assimilate and saturate the body with all
essential nutrients. This approach in turn
allows you to stimulate insulin response, restores strength and
stores the muscles with the necessary glycogen.

The main objective of the diet is to maximize
limit the intake of simple carbohydrates that
capable of leading to an undesirable surge of glucose in the blood.

To do this, you just need to change your diet.
power supply. Eat every three hours, for example, breakfast, second
breakfast, lunch, afternoon tea and dinner, in small portions. And eat
so necessary always – such a correct daily routine will allow
you always feel healthy and stay at the same time
form.

This version of the diet will help you lose weight without any special
stress for the body, an average of one week getting rid of
one kilogram of fat.

If such gradual results suit you, then you
you just need to stick to the following sample menu:

Among protein foods, lean fish would be an excellent option
meat and seafood due to the almost complete absence of carbohydrates.
And also the transition to all legumes,
for example, soybeans, beans, barley, lentils or peas.

Try to include as many foods as possible in your diet.
which contain fiber, replace chocolate and cakes with
dried fruits and fruit.

The above menu is approximate, so you can change it in
depending on their taste preferences. First because
the increased amount of carbohydrates you may linger
fluid in the body, but after a while everything will work out, and
scales will show the desired result.

If you decide to lose weight with this diet, you should know
that there are special foods in nature that have glycemic
the index, though small, but due to the increased content in them
Fats are not recommended. These can be safely attributed
chocolate and some types of nuts.

Также не смешивайте продукты, имеющие разные Gi. For example, on
breakfast is better not to combine porridge and scrambled eggs, leave an omelet for lunch, and
Porridge, add a slice of whole grain bread.

The longer you cook the food, the higher it will have the final
glycemic index, so try to give up fried
food. Cut foods are not too small, because, for example, GI
grated carrots are much higher than the whole. Hot products have
higher glycemic index than cold or
cooled down.

It is also important: “Smoothie for weight loss” and “Will
lose weight application tinctures? “.