In LiveJournal, there is a whole community called
anorexia Its participants are young girls who are obsessed with losing weight.
Every day they exchange experiences about how certain
appetite suppressant pills about where to get
potent drugs without a prescription tell how today
they vomited, post photos that seem to themselves too
complete. 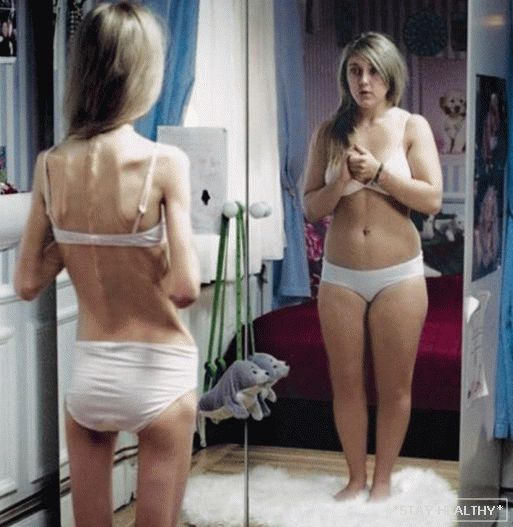 According to specialized polls, many women
they say they even dream of getting anorexia. However they see
only the outward manifestation of this disease is an incredible thinness, and not
understand how dangerous and painful it really is
state.

Anorexia starts is quite trivial – with the desire a little bit
lose weight by the summer or climb into tight jeans. Gradually
desire to lose weight can turn into an obsessive state – the amount
food consumption is reduced to a minimum, exercise
brought to the point of absurdity, in some cases the disease is accompanied
bulimia – artificial induction of vomiting after eating.

These symptoms are the first and most eloquent, because
anorexia is a mental illness. In this case, weight loss can be
just catastrophic.

The danger of the disease is that it is an obsessive state.
it is no longer possible to stop at will – without timely
The help of an anorexic doctor may simply die from exhaustion. Sharp
weight loss and excessive loads lead to the appearance of a whole
a bunch of diseases, many of which acquire chronic
character Doctors call the first cause of death of anorexics
heart failure caused by prolonged exhaustion
organism.

Anorexia treatment is quite large, in advanced cases
doctors have to inject nutrients intravenously
since the patient is simply unable to fully eat. Used by
A variety of psychotropic drugs – antidepressants and
tranquilizers. A huge problem is that anorexia
characterized by frequent relapses: taking the cure
a person runs the risk of “breaking” again due to the brain
habits to reject food.

Doctors and nutritionists testify: anorexia is not easy
painful thinness, which so attracts many girls. it
full mental illness, which is very dangerous. Exactly
therefore, in your desire to lose weight you should not go too far.
Psychologists say: the main cause of anorexia is
low self-esteem that leads to obsessive
states.

The problem is that the problem with self-esteem is not
less than half of all women. Often it is connected with the problem.
overweight, and experts fear a sharp increase in the number
anorexia among the young
female. After all, according to statistics, the most common
Anorexic age is 14-20 years old, when a person is not yet
formed.

What you need to do to not get sick with anorexia? it вопрос
self-control and adequate perception of life. Instead of radical
weight loss learn to love yourself and take what you are
there is.

Moreover, the fat in reasonable quantities is necessary for women
to the body. No matter how the glossy magazines, society, condemn the fullness
friends, but at all times men have attracted and continue
attract curvy hips and chest.  And for the face just fat
is required. When the fiber gets thinner with age, the skin sags
and the facial contour is crumbling. Not by chance one of the most popular
plastic surgery in the US is now a micro lipofilling –
filling the subcutaneous layers with own fat taken from other
body parts. Mature women have resorted to this procedure.
which fatty tissue leaves due to age.

If you still decide to lose radically, ask
close to monitor your behavior during the diet, and stop
you, if losing weight has gone too far. If the part is
it is clear that you are too radical and refuse to eat for a long time,
exhaust yourself, weigh yourself several times a day and constantly
count calories, refuse to be photographed because of the fullness, then
this can be a reason to seek help from a doctor. But even
if the events took such a turn – do not worry: anorexia,
especially in the early stages, it is relatively easy to cure. The main thing –
Do not repeat your mistakes again.